Most Beautiful Bridge Design from Around The World - The Architecture Designs 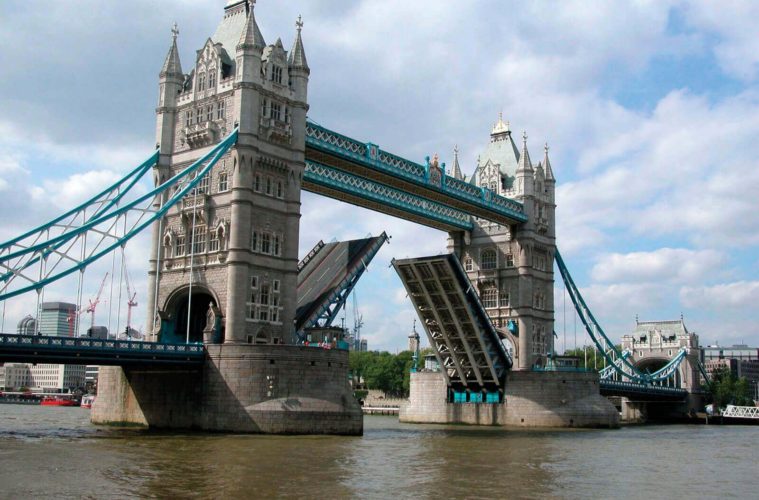 Most Beautiful Bridge Design from Around The World

A bridge has to be efficient, economical, simple yet elegant. There are many unique and beautiful bridge designs at www.thearchitecturedesigns.com throughout the world which are very well known. Some of them are- 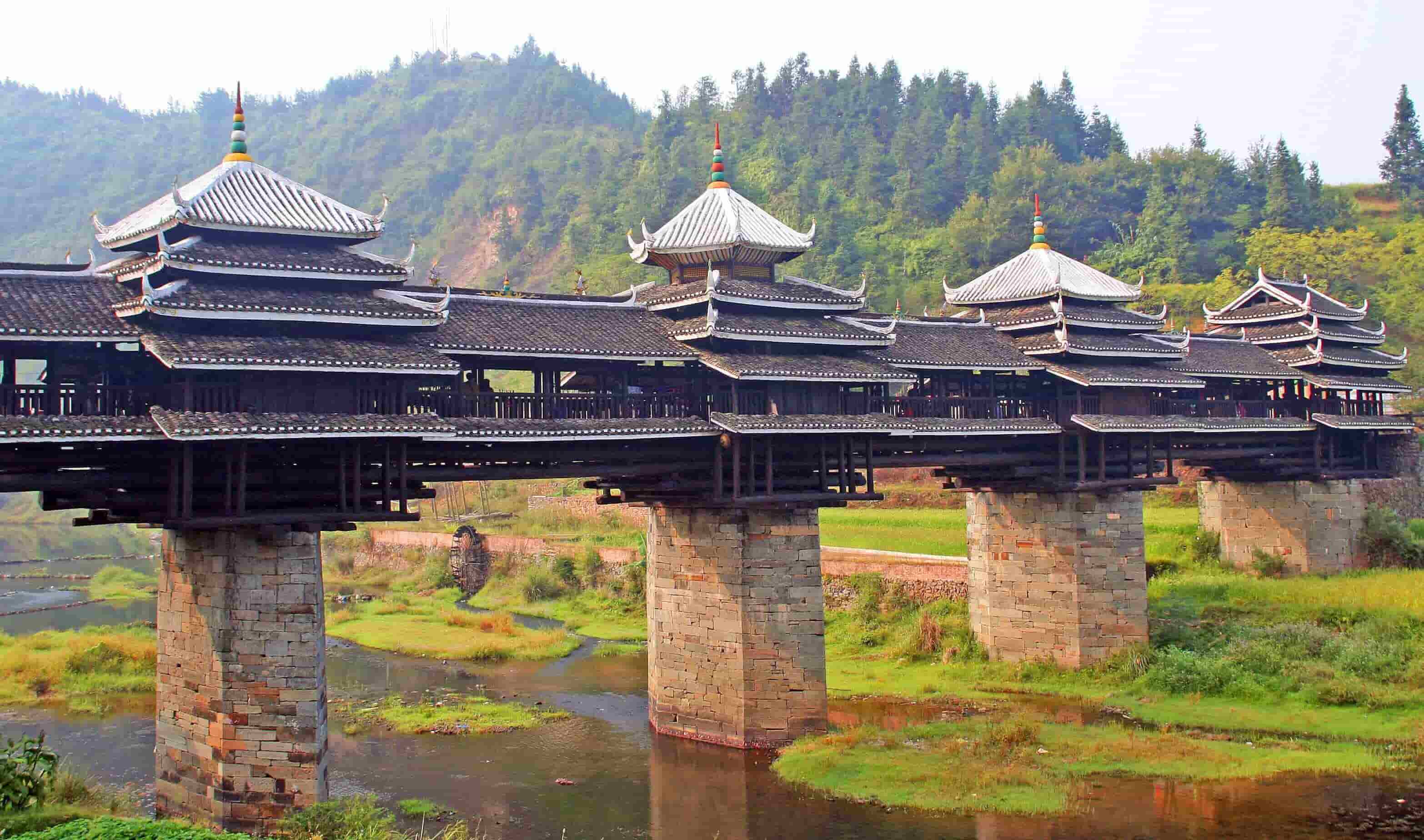 The Chengyang Wind and Rain Bridge are mainly made of wood. The most interesting fact is that there are no nails or rivets. Attachment is made by dovetailing a wood.

When you are in Florence a visit to the Ponte Vecchio, or Old Bridge across the Arno is a must. The most amazing fact about the bridge is that it hosted all types of shops including butchers and tanners at one time. Now only jewelry shops are there. If you stroll along the Arno at night you will be bewildered by the incredible reflections.

Stari Most, Bosnia and Herzegovina 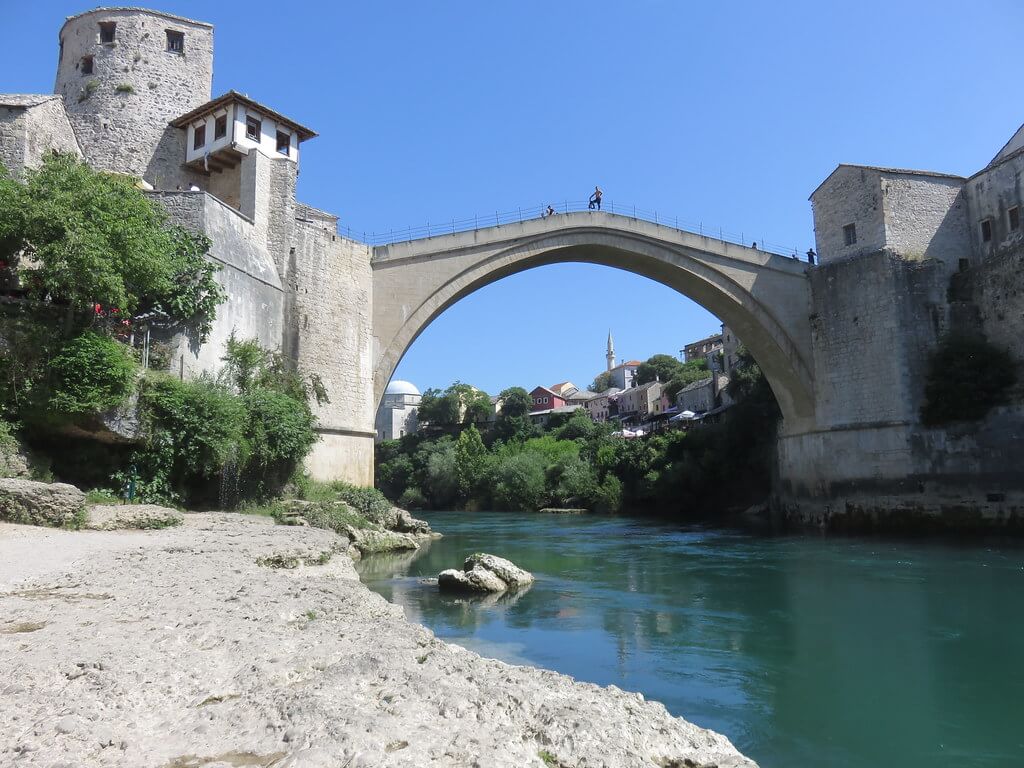 The “Old Bridge” Stari Most, Bosnia And Herzegovina was originally a stone bridge and was the greatest architectural treasure. It appeared like a rainbow in a milky way. The construction was so strong that tanks could go over it. It was renovated through international financial aid. 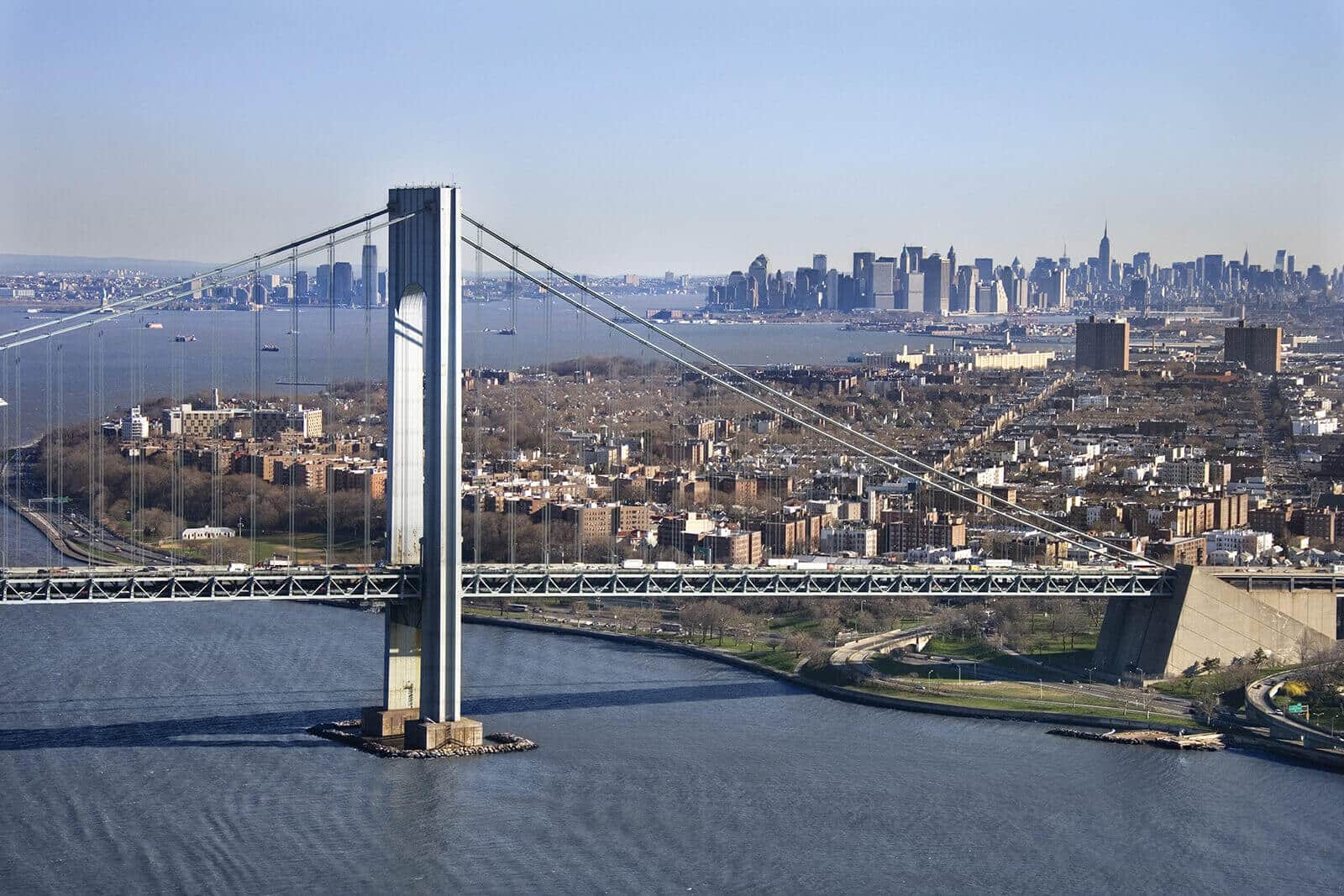 The Verrazzano-Narrows Bridge is a breathtakingly beautiful suspension bridge spanning New York Harbour. It has a double-decker six-lane-wide roadway and is supported by four cables hung from towers. 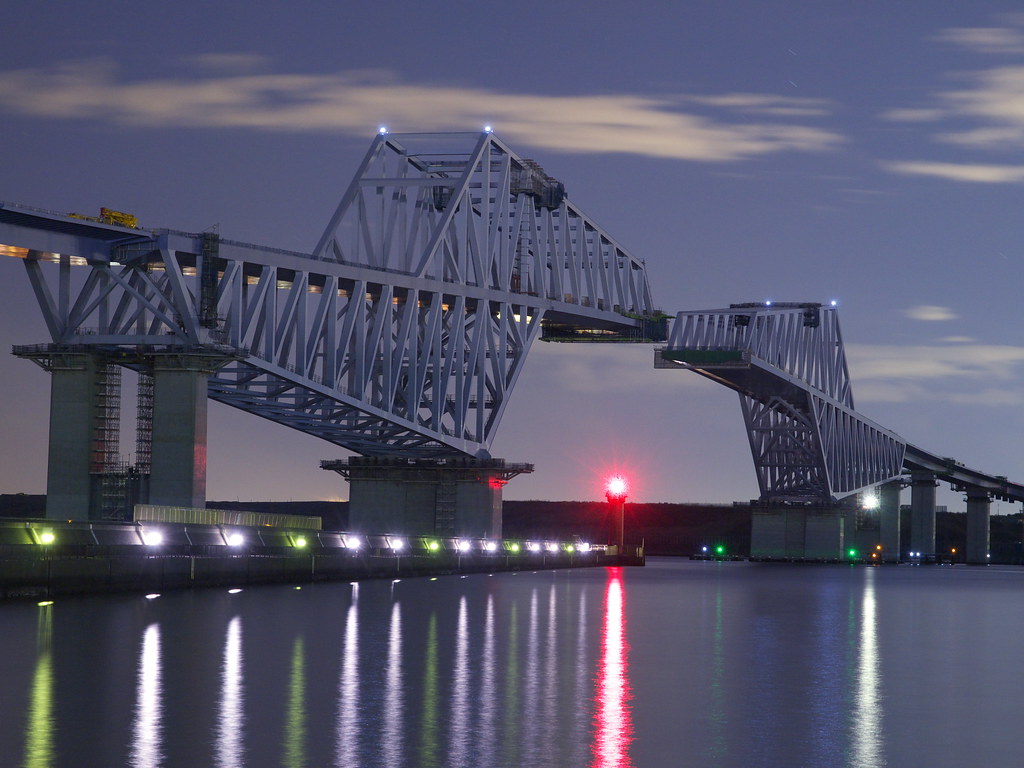 The Tokyo Gate Bridge is like two dinosaurs facing off. Hence its nickname “Dinosaur Bridge.” It is a continuous truss-box composite bridge. It is now a new sensation in Tokyo. 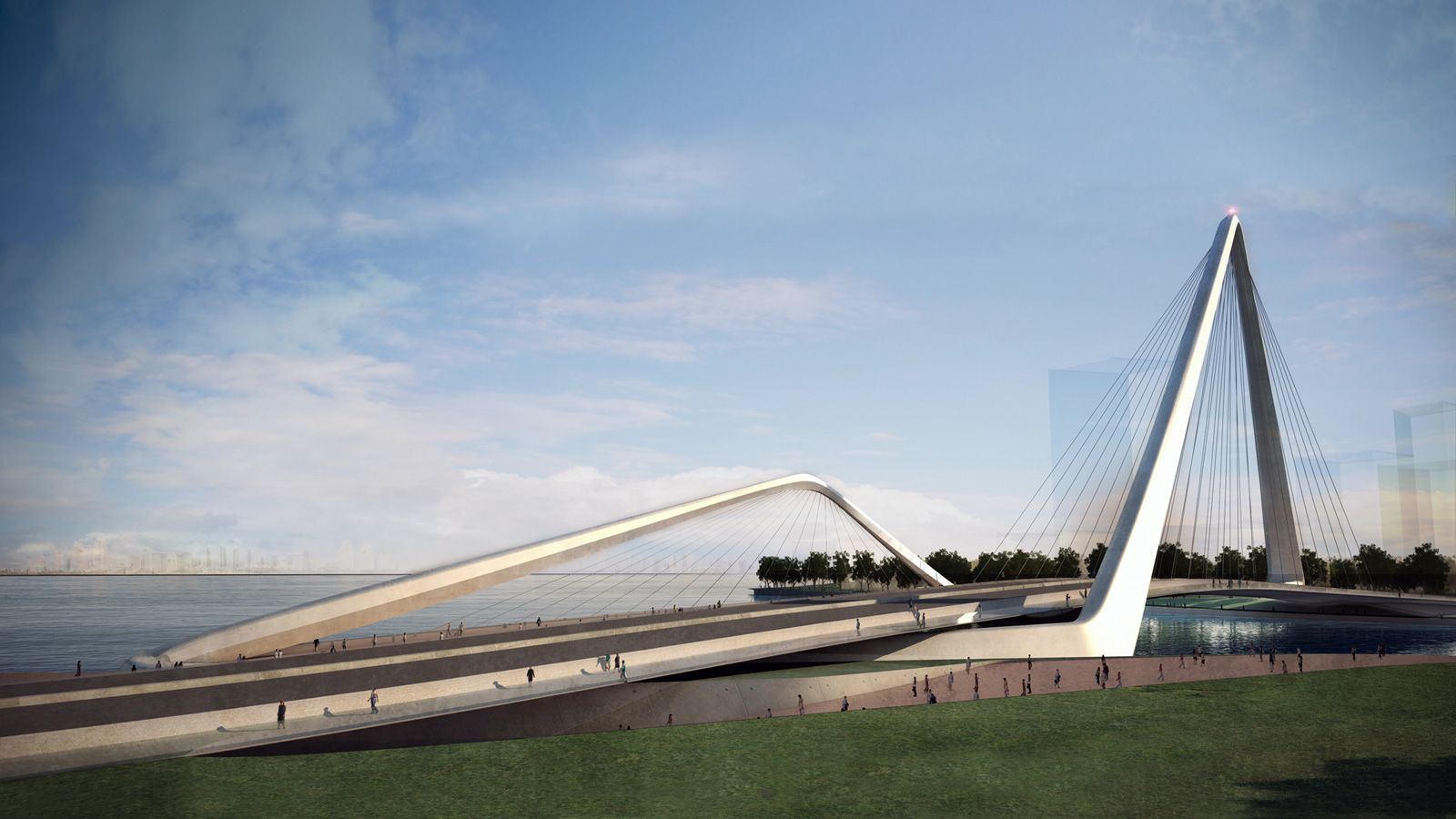 The Infinity Loop Bridge creates a gateway to south China’s commercial hub. The spectacular feature is the rolling ribbon-like structure that veils around the 6 lane road in a continuous sculptural loop that mounts upwards making 2 triangular arch forms. It is a visual elixir. When the bridge gets reflected off the water, it makes an 88 image which is a sign of prosperity in Chinese culture. 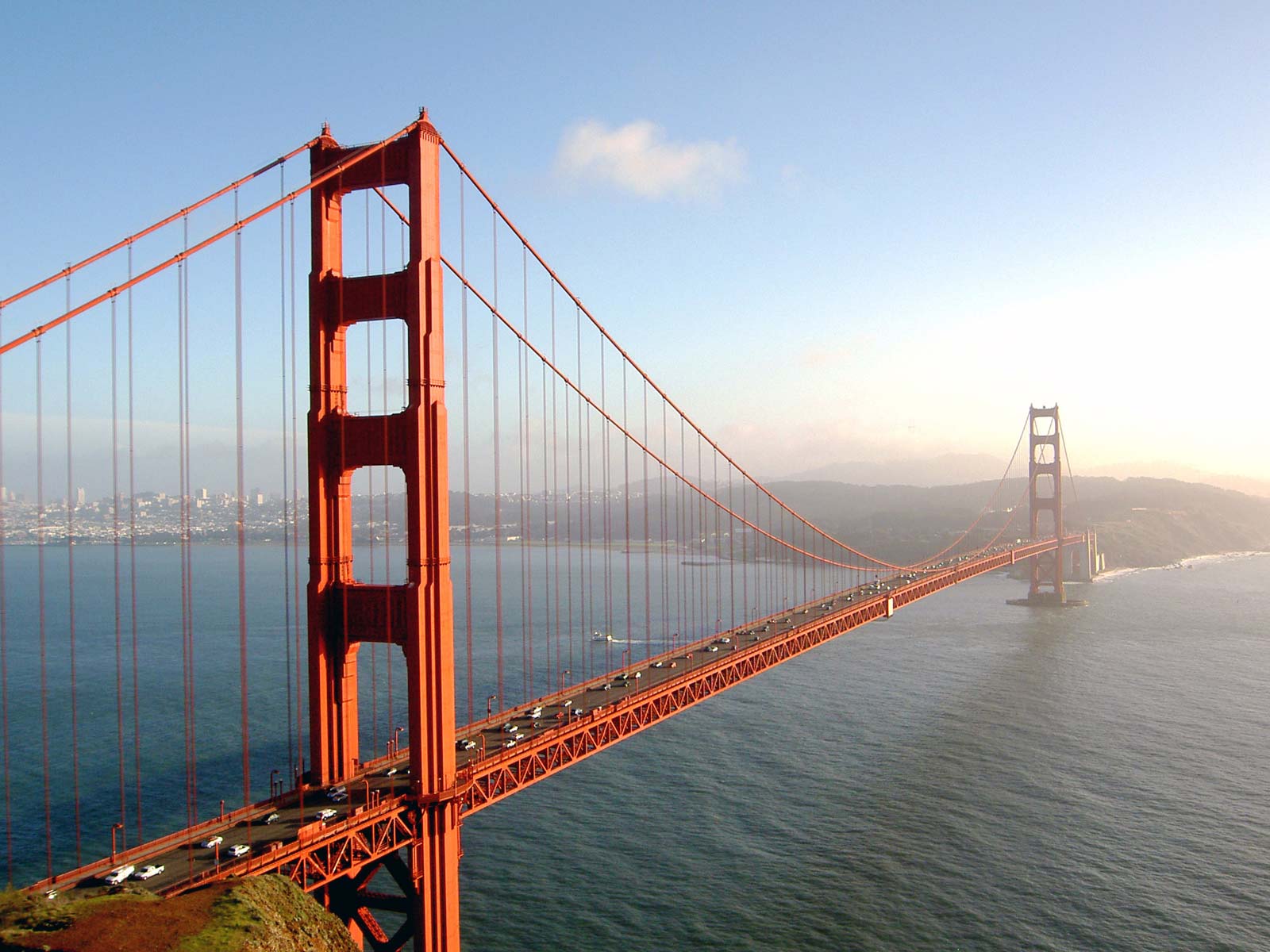 The Golden Gate Bridge of California exhibits an iconic bridge architecture. The construction squad had challenging situations as the roadway and towers were constructed over water.

Lego Bridge By Megx of western Germany is made from colorful interlocking jumbo lego bricks of concrete, The bridge is in primary colors. The shading was done so dexterously that it looked almost lifelike. 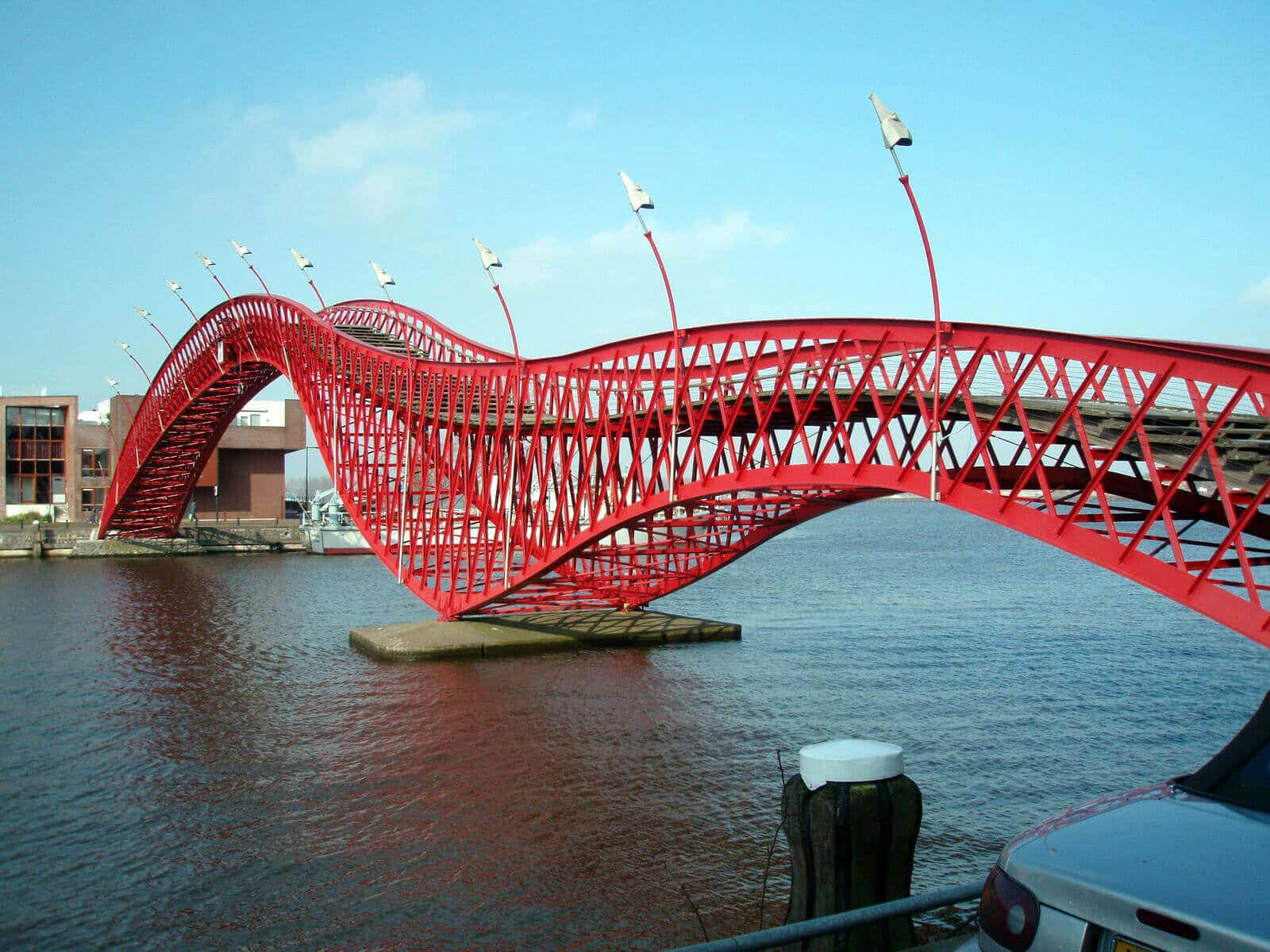 Python Bridge, Holland, known as High Bridge because of its high elevation, is in Amsterdam. The bridge is bright red which offers a spectacular view from a distance. 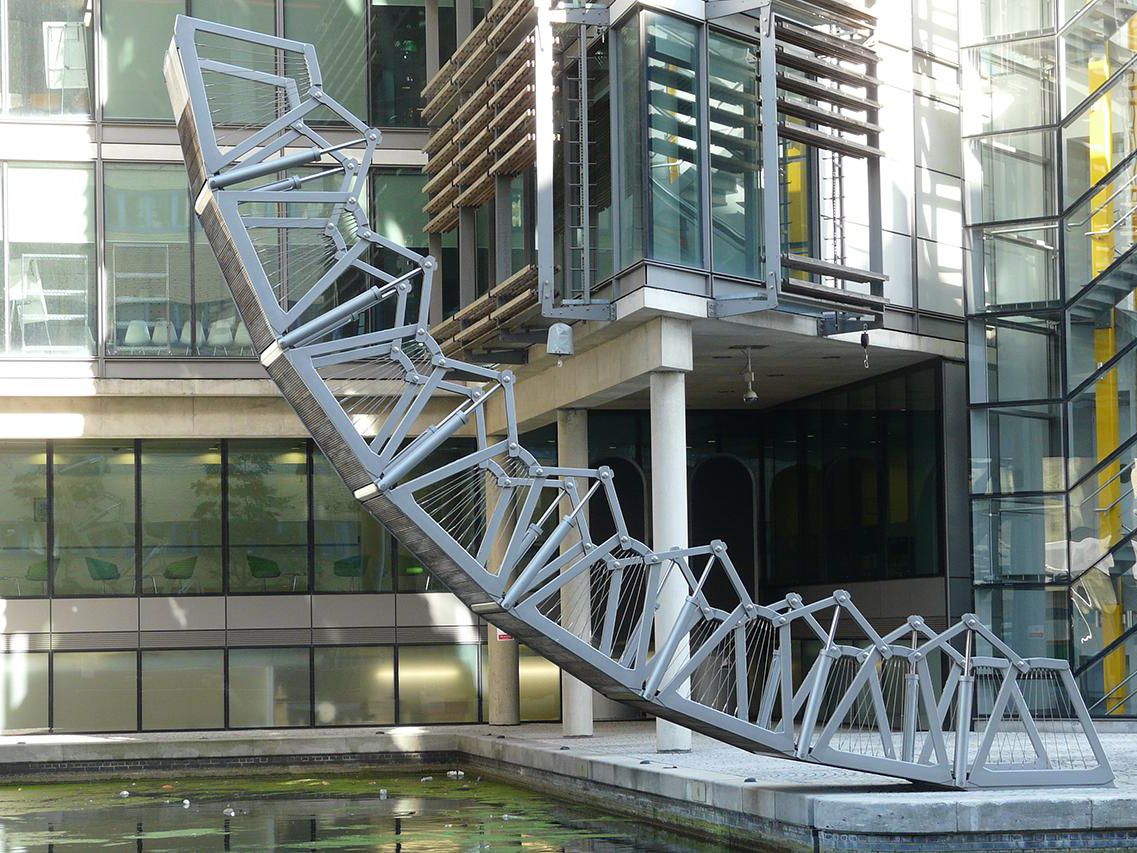 Rolling Bridge In Paddington Basin, London is a curling movable bridge and is made up of 8 triangular steel segments, which winds up to form an octagonal sculpture. It spectacularly opens up every Wednesday, Friday, and Saturday at 2 pm. 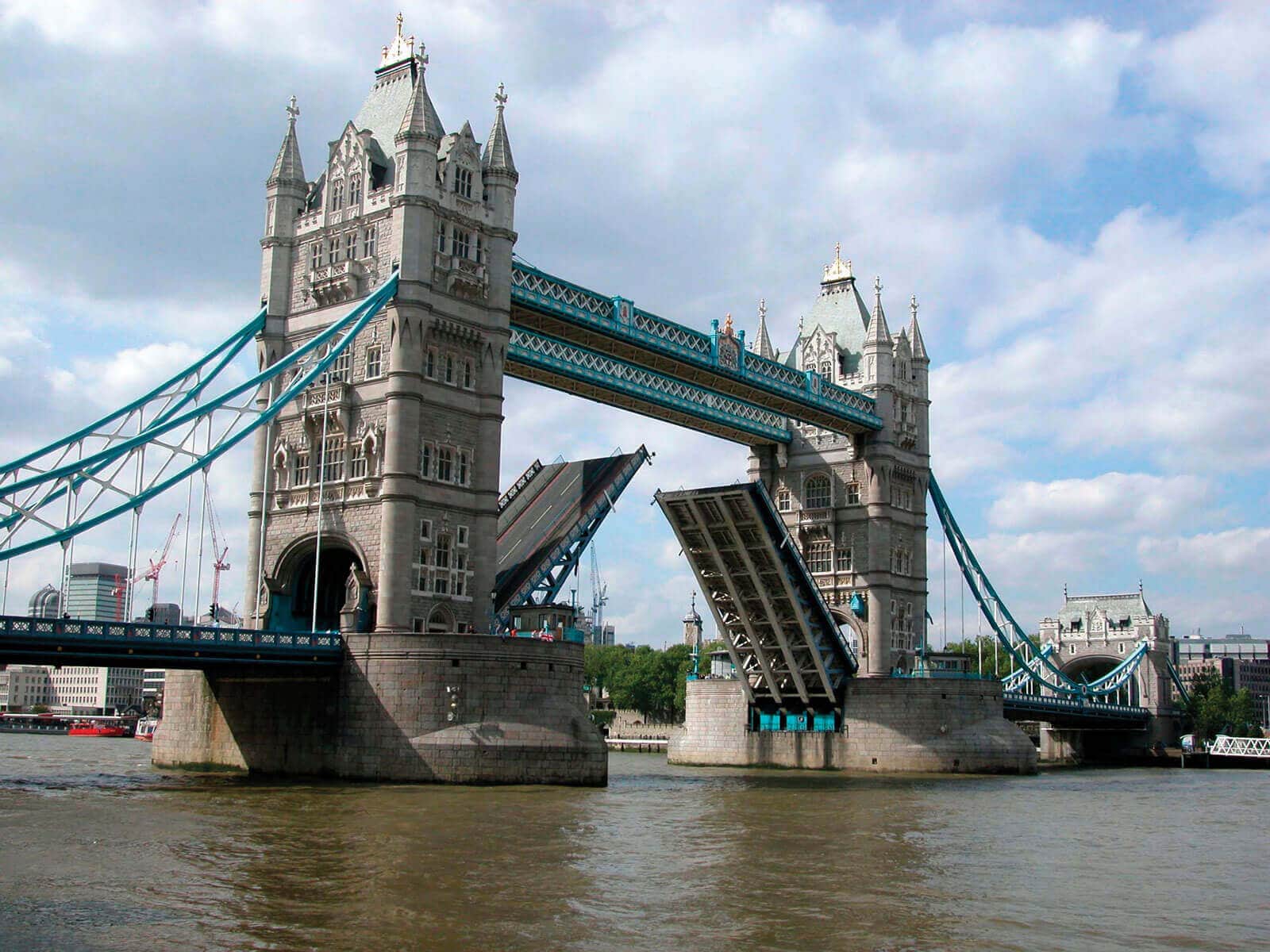 Tower Bridge, London, is a movable bridge, made up of double-leaf bascule that spans the River Thames. It is a distinct landmark that aesthetically complements the background. It operates on electric motors but the historic steam power system is still kept in good repair as a tourist display. 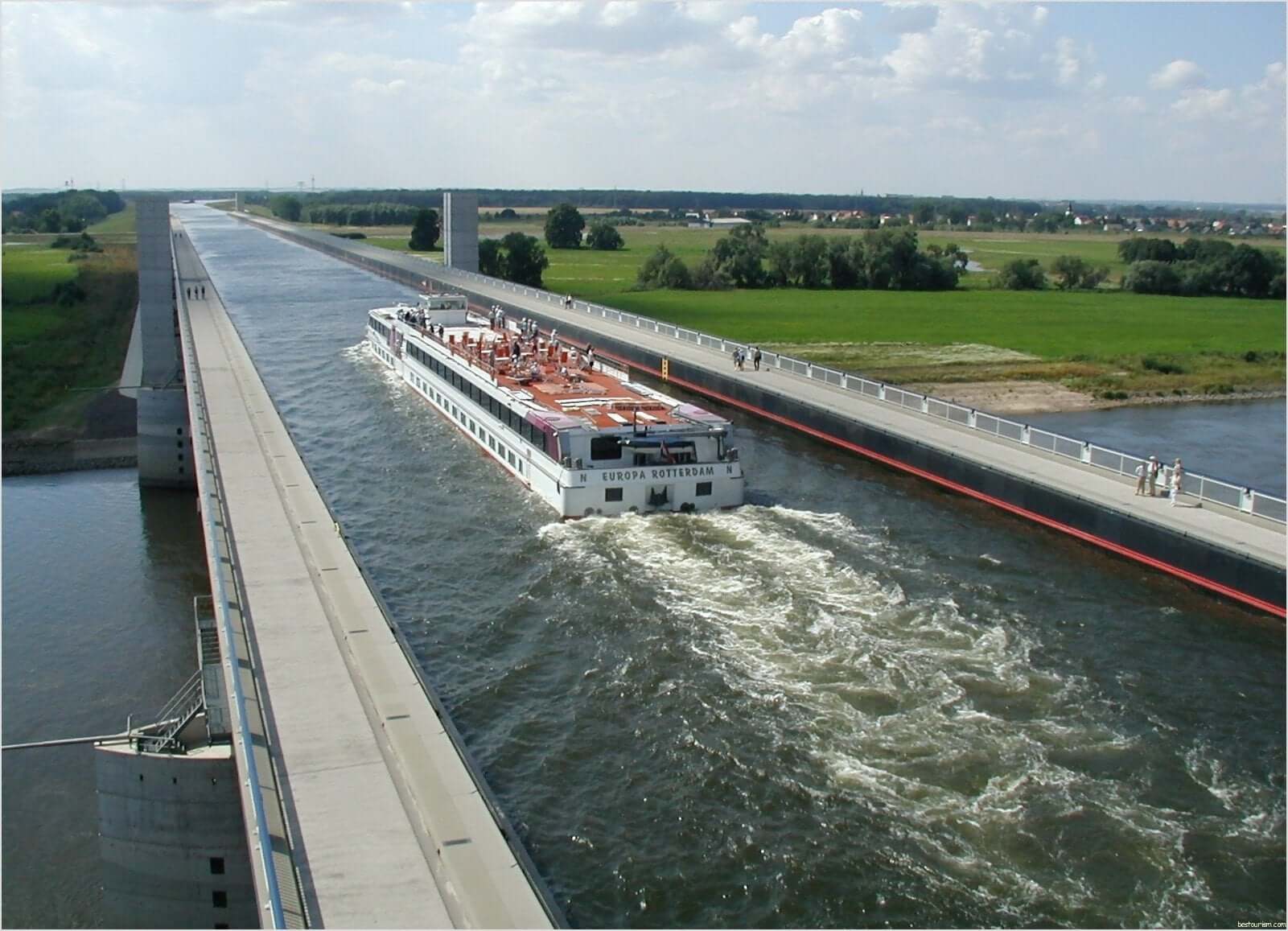 Magdeburg Water Bridge, Germany, is a navigable conduit also known as Kachip’s bridge and is over the river Elbe. It is a bridge for the ships to take a short cut of almost 12km! This longest water-bridge is an engineering pinnacle.

The Bridge of Immortals Huangshan, China 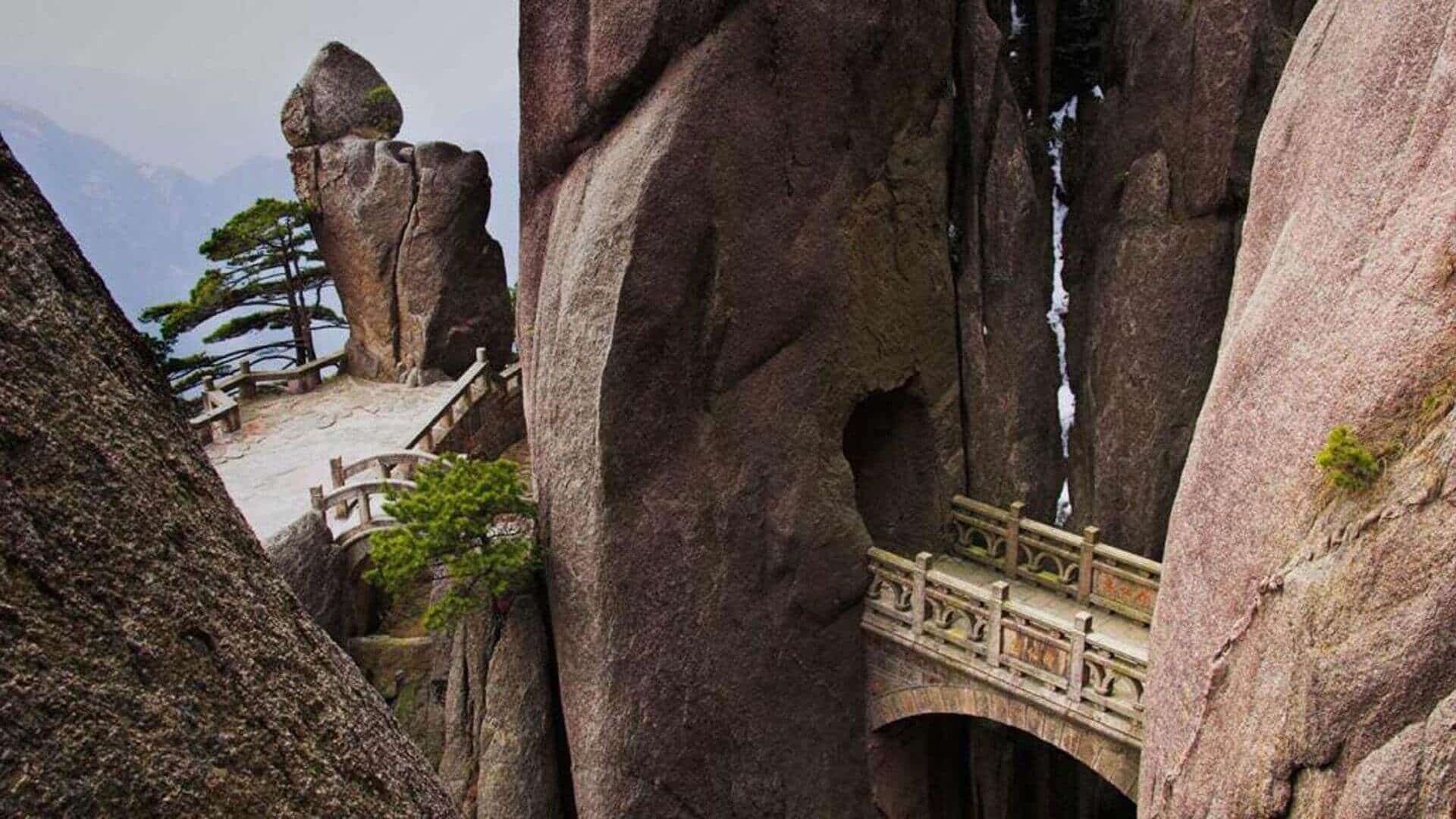 The Bridge Of Immortals Huangshan, China is on the Yellow Mountains. The gasping drop below will simply take your breath away. It is made up of just a few pieces of wood that are bound together by large staples. A chain is there for the hikers to hold. 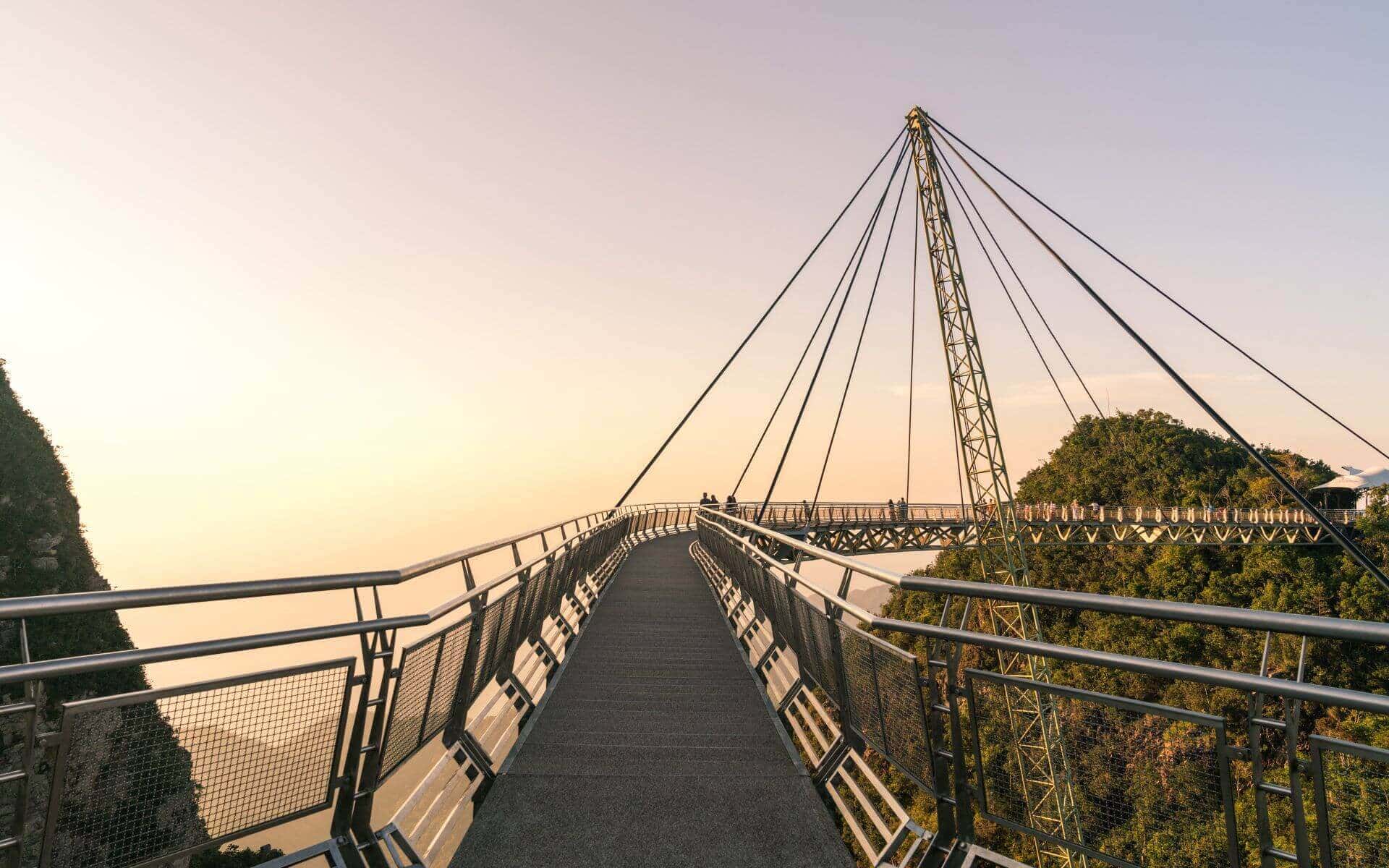 Sky Bridge Langkawi, Malaysia is a curved pedestrian cable-stayed bridge. Situated at the peak of Gunung Mat Cincang on the main island of Langkawi archipelago. To reach the bridge one has to take a cable car 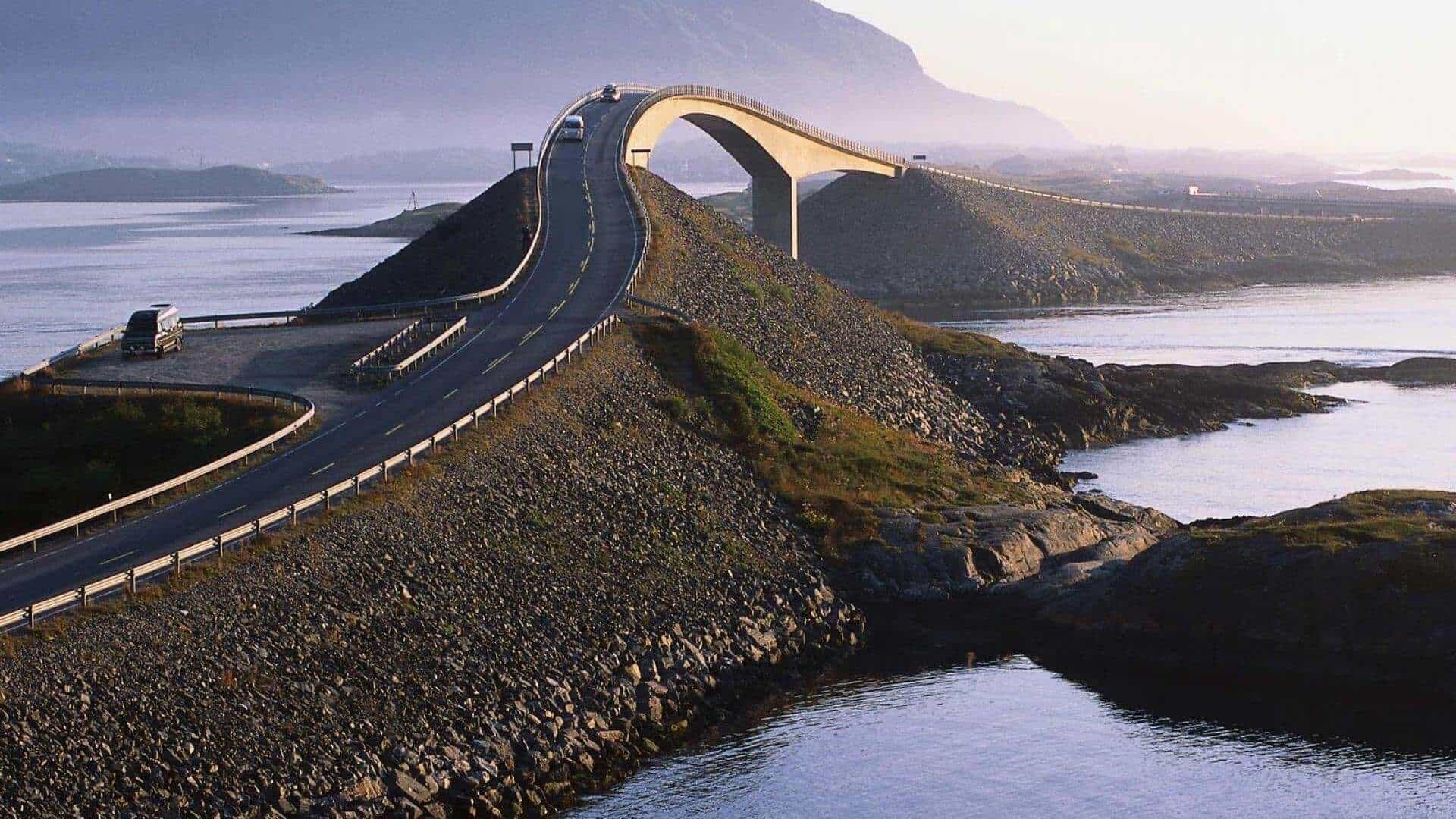 Storseisundet Bridge, Norway is a cantilever that resembles a diving board when seen from a particular angle. It is one of the most remarkable bridges in the world. Though it seems to be dangerously leading to nowhere yet it is saved to drive on it. Famous for its sharp bends. 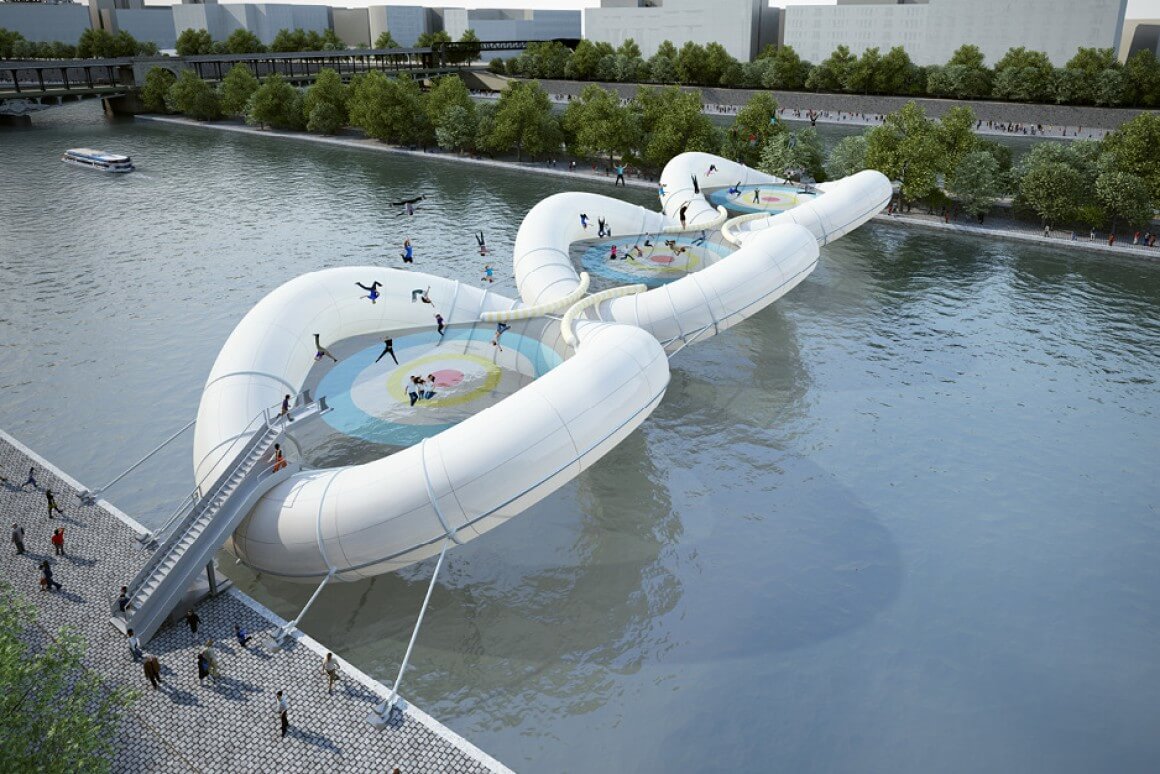 Trampoline Bridge, Paris is on the river Seine and is made up of humungous floating trampoline’s which is accessible by stairs on both sides. 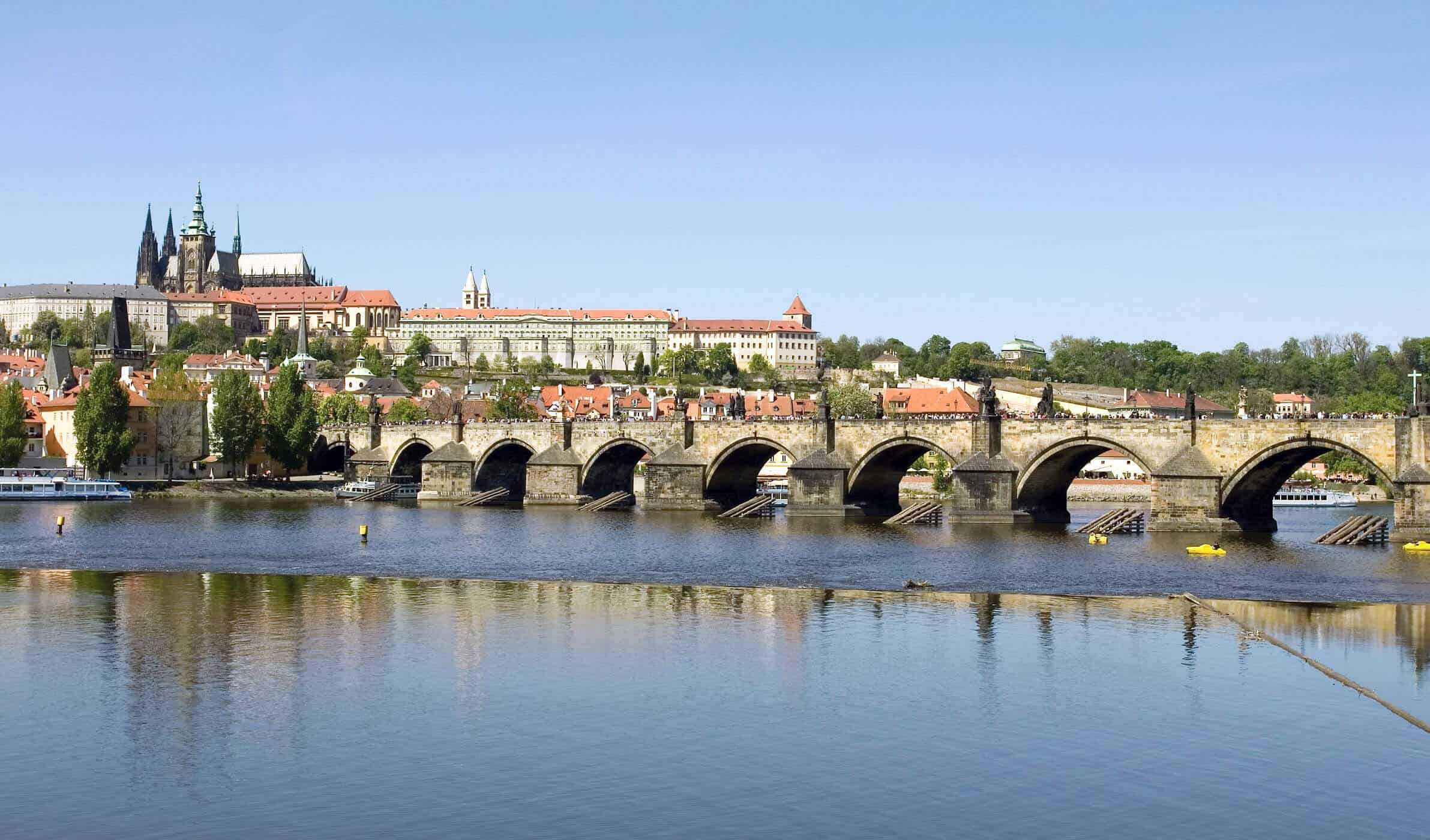 Charles Bridge, Prague is a historic bridge across Vltava river made of stone. There are three bridge towers. The statue is decorated with statues and statuaries and hence is very picturesque. 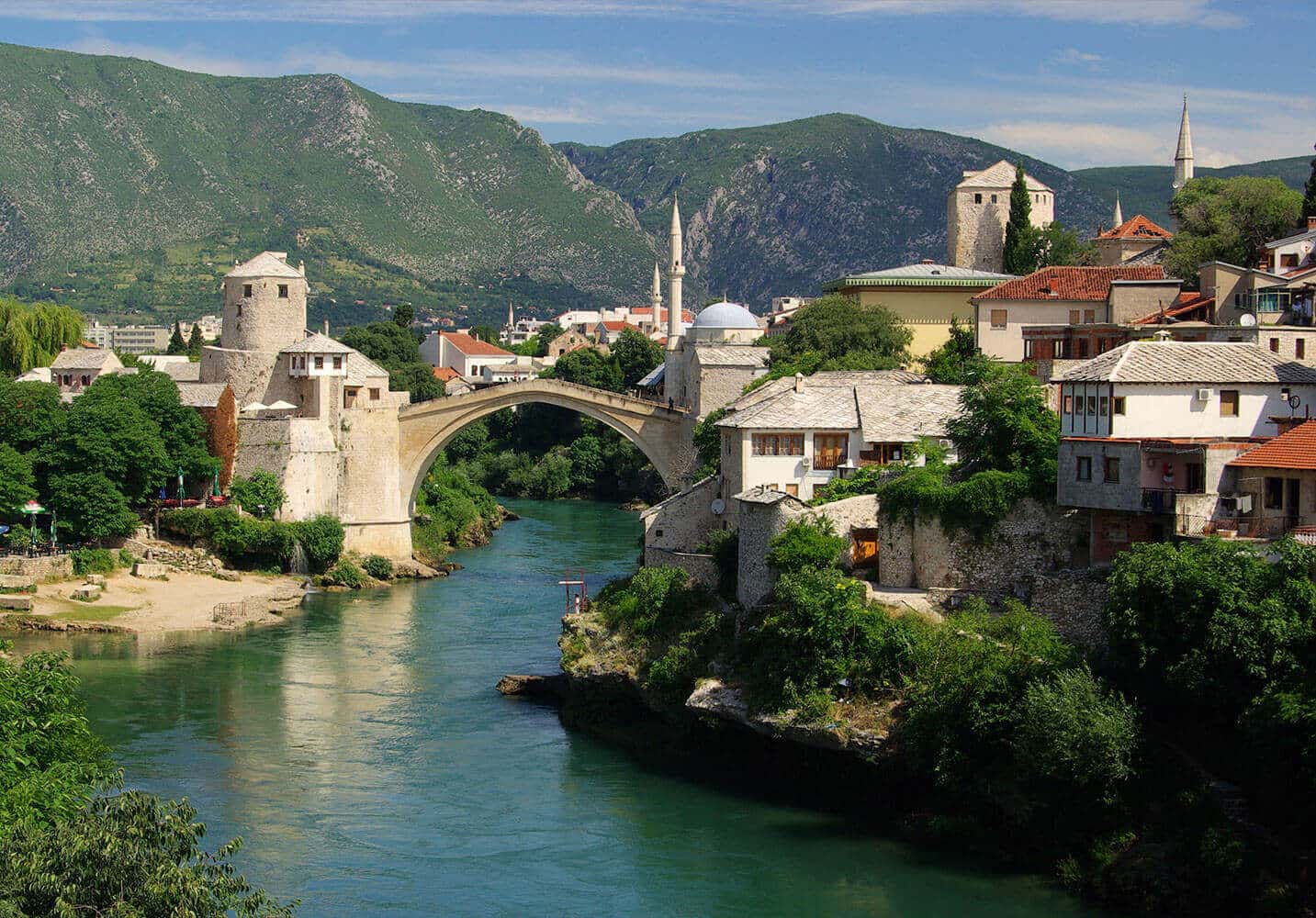 Mostar Bridge, Bosnia is also known as the old bridge, has been rebuilt by UNESCO. It crosses the river Neretva and is a stone arch bridge.

READ MORE  10+ Tallest Bridges in The World - Don't Miss It 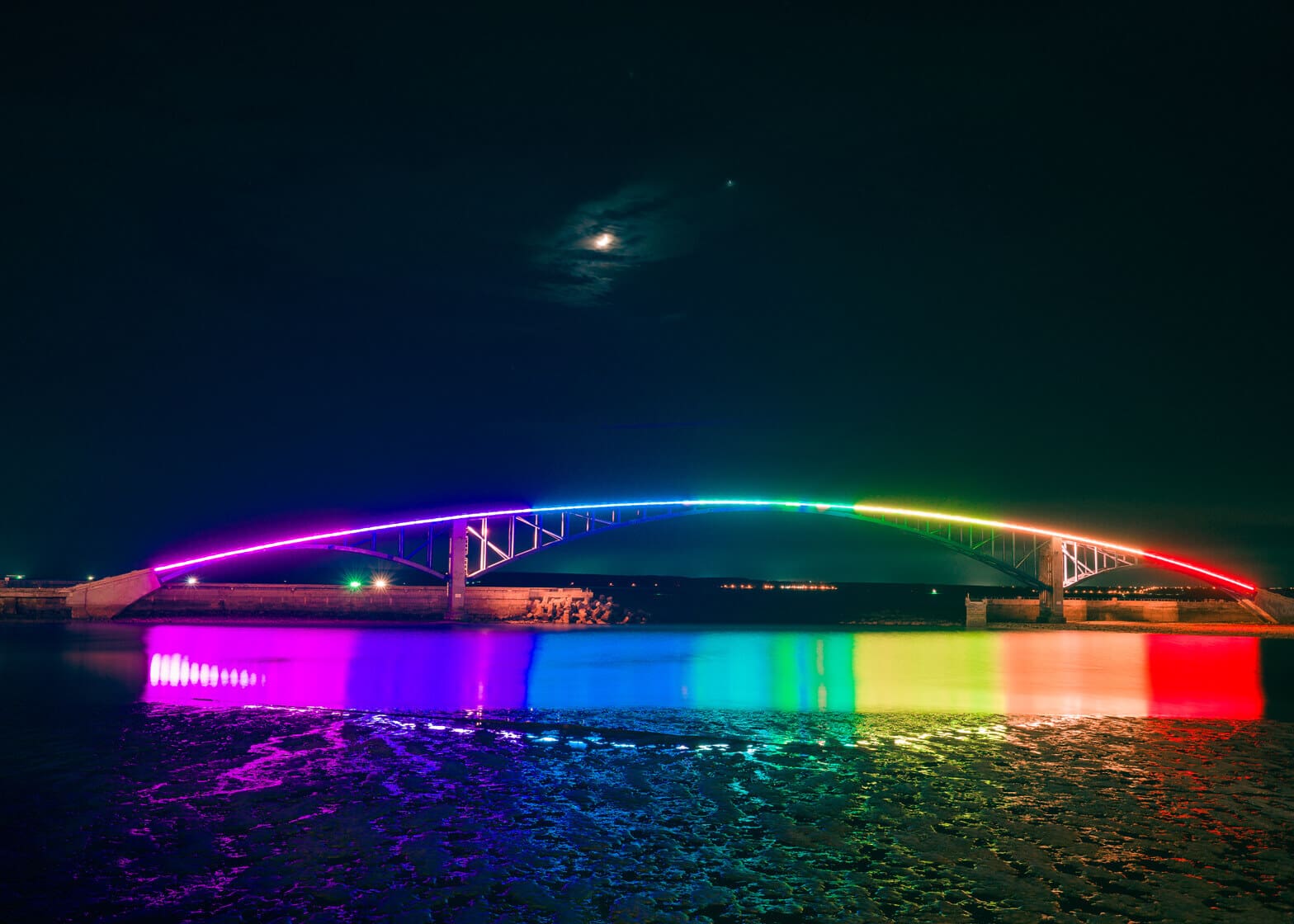 Xiying Rainbow Bridge Taiwan is a pedestrian bridge with a simple steel arch structure. However, at night, it is spectacular to watch the colors of the rainbow reflected on the river produced by neon strips on put on the bridge. 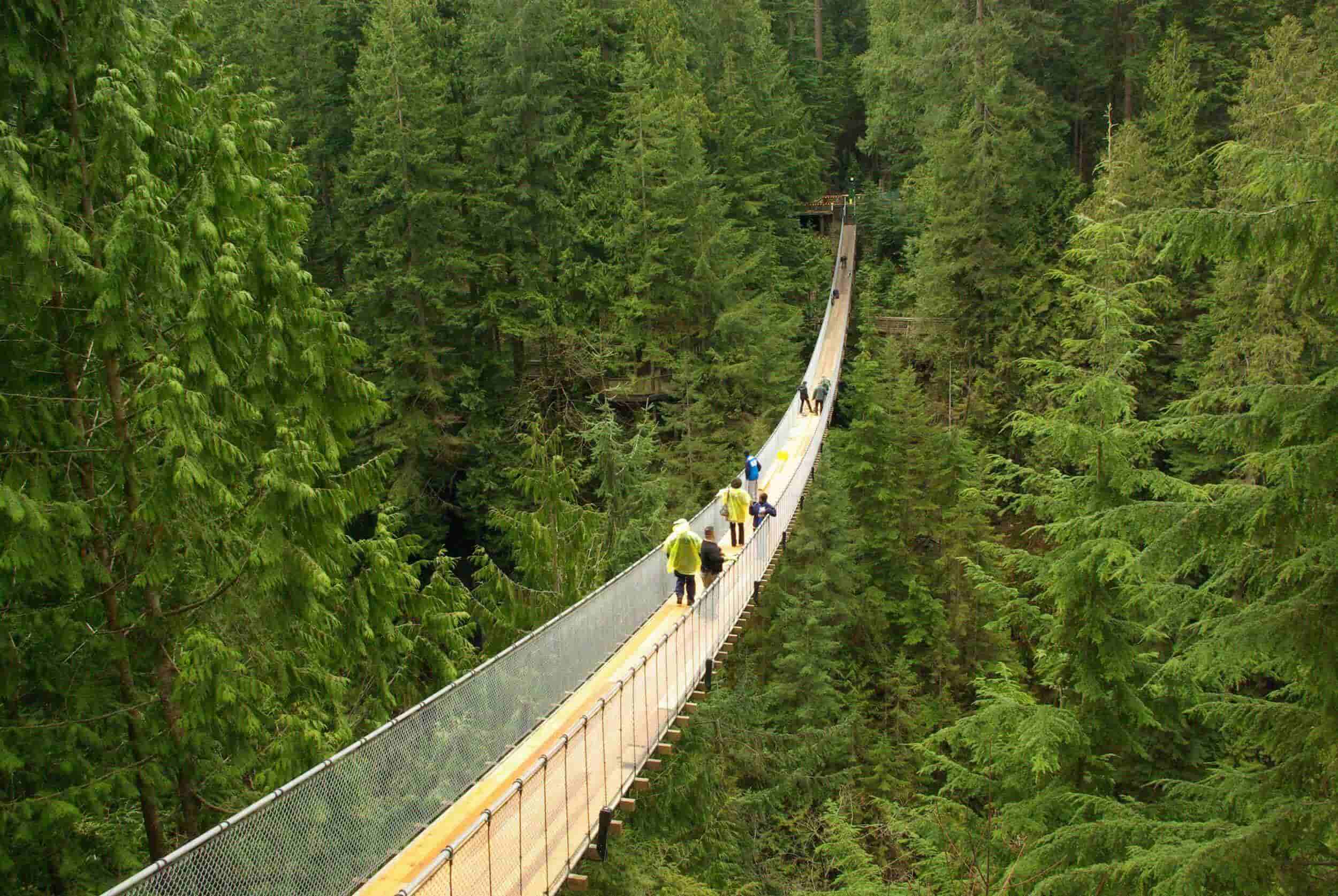 Capilano Suspension Bridge Vancouver is a cantilevered walkway. One has to buy a ticket to walk over the 140m long bridge and enjoy the breath-taking view of a park below. 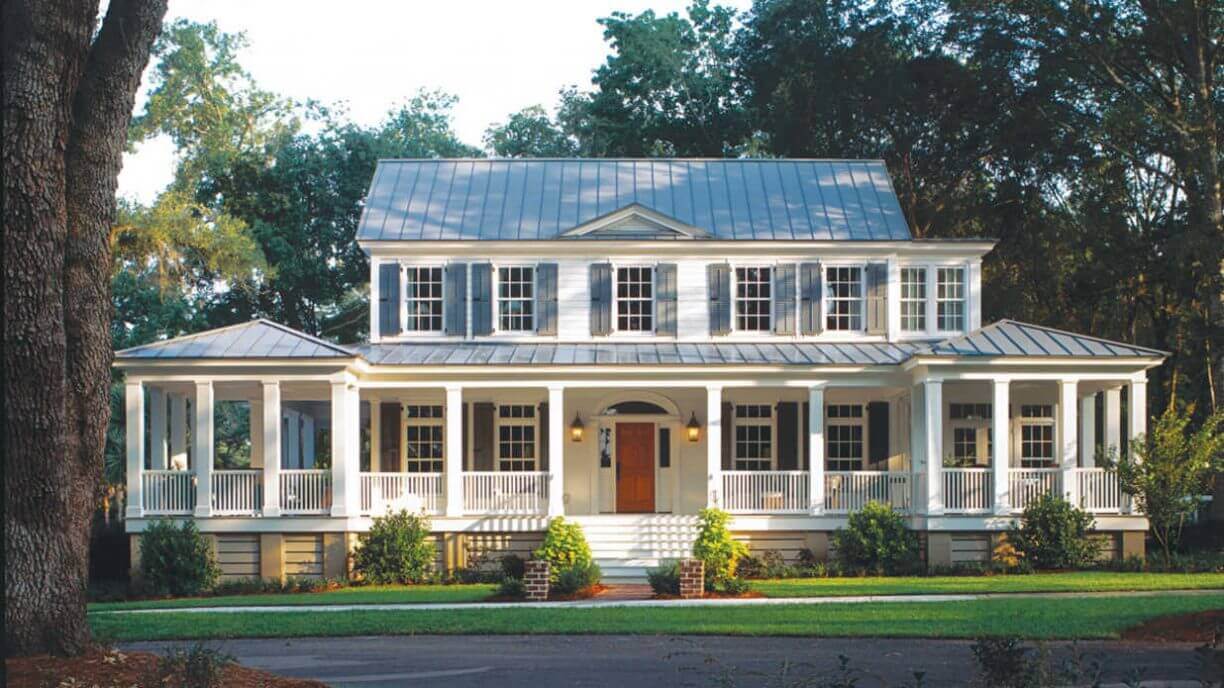